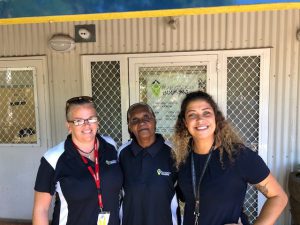 Foundation Housing’s new team at its Frederick Street Lodge is bringing about positive improvements at the complex with rooms nearly full and residents thriving.

Housing Coordinators Tammy and Josie have been in their roles for several months, with caretaker Katie joining earlier this year.  All three have been working hard to make Frederick St a safe place to live where residents are encouraged to connect with each other and the community.

A number of valuable partnerships have been forged with Broome’s community support agencies, ensuring support services are provided in conjunction with accommodation to give people the best chance to move forward with their lives.

Broome’s Centrecare team in particular have been a key partner in housing people.  Centrecare and Foundation Housing staff have together hosted resident barbeques to help build a sense of community.  As Tammy says, “It’s easier to live with your neighbours when you know them.”

Initially starting life as a motel and then a facility for key workers, Frederick St has adapted to respond to Broome’s  need for more affordable housing.  A robust referral process and ongoing partnerships with service agencies have resulted in great stability for everyone living and working at Frederick Street and better outcomes for the Broome community in general.