Foundation Housing marked the beginning of Homelessness Week 2019 by partnering with Shelter WA to host Bob Jordan, National Director for the Housing First program in Ireland, for a special presentation

Over 30 community housing sector stakeholders attended,  eager to hear about the challenges of social and community housing and the lessons learnt across Europe and Ireland. The audience were reminded that during weeks such as Homelessness Week, how important it is  to take time out to think about strategy.

Bob’s gave an overview of the differences in social housing models across Europe, describing the Dutch and the British systems as the benchmark for good practice.

Bob explained that across Europe some countries have large social housing systems catering for a broad spectrum of income groups, whereas several others, including Ireland, have what’s known as ‘residualised’ systems. Residualised systems are those that cater exclusively for low income households. This best describes Australia’s current social housing system.

With his vast experience in the community housing sector in Ireland, Bob noted that there are similarities between the sectors there and here, specifically in the large number of providers many of whom have a small numbers of properties. In Ireland there’s an effective movement toward sector consolidation that would see the creation of less providers, with larger numbers of homes under management. This is being driven by the knowledge that larger community housing providers are best placed to borrow and construct new properties and meet the strict new regulations.

The audience learned that the funding model for Irish community housing providers which, generous by international standards, has provided significant growth in the sector during the last three years. He also noted that the community housing sector in Ireland has developed a universally accepted reputation for excellence in terms of property development and tenancy management.

Bob spoke about the difficulties Ireland continues to face after the property crash it suffered after the Global Financial Crisis highlighting the impact of years of economic austerity policies on the construction industry and the knock on effect of almost a decade of underbuilding on rents, house prices and social housing supply.

He underlined the importance of ensuring that the construction industry is supported during property downturns so as to avoid similar problems occurring here.

With insightful questions from the audience, it was evident that everyone was eager to learn from Bob’s experience and the successes and failures across both Europe and Ireland.

Thank you to Bob Jordan for his presentation, Michelle Mackenzie and the team at Shelter WA for making the event possible.

For a full list of events throughout Homelessness Week visit Shelter WA. 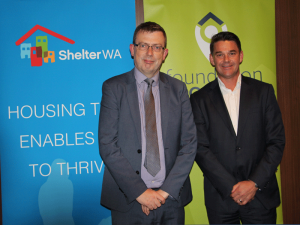