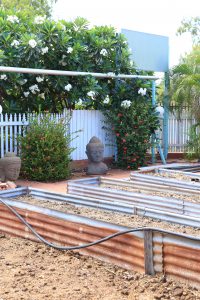 The new garden beds at the Broome lodge

A wonderful idea is blooming in the once desolate grounds of Foundation Housing’s Frederick St lodge.

A small team of residents is working with the participants of a Men’s Outreach project to create a large community garden where previously there was just a filled-in swimming pool and a sea of hot dust. The project, which is due for completion early next year, will comprise five large raised garden beds with seasonal produce including bok choy, tomatoes, corn, bananas and more.

The initial idea for the garden came from a resident, Rob, who mentioned it to fellow resident Bobby Bowles. As a supervisor for Men’s Outreach’s ‘Work For The Dole’ program, Bobby had been keeping an eye out for possible projects and quickly saw the potential at his own home in Frederick St.

“Everyone was on the same page and once we started communicating, things started to happen,” Bobby explains. “It’s a heck of a lot of work but it will really be worth it. To be able to walk out of your room and head to the garden and pull fresh vegies and fruit straight out of the ground – that’s terrific.”

While a small team of residents has been assisting the Men’s Outreach participants to establish the garden, Bobby believes many more will get involved once the first crops are planted early next year. “We’ve just put in a heap of manure from the rodeo grounds and once that has settled and we can plant things, I think you’ll find residents coming down, wandering about the garden, doing some weeding and taking pride in what has been created.”

Bobby makes special mention of Kim Courtney, a lecturer at TAFE who has been teaching various skills to everyone involved in the project. “A lot of people have done a lot of work to help out, but Kim’s involvement and his experience have been particularly great – he deserves a lot of thanks.”

Foundation Housing Service Delivery Manager Jim Banks believes the community garden will provide many benefits to residents, who will ultimately be responsible for its maintenance once the Work For The Dole project is complete. “This is the sort of thing that helps build a sense of community,” he says. “It gets people out of their rooms and sharing in something bigger. There are also financial benefits and of course health benefits.”

Men’s Outreach CEO Peter Mitchell says the pilot project has planted the seeds for a productive working partnership with Foundation Housing. “There is a big overlap in our clients and so I can see the future value in working together on other projects and establishing a more formal partnership,” he says.

If you have an idea about a project that could improve life at your home, be sure to let you Lodging Coordinator know.