Food based partnership a recipe for success

A partnership between well known Perth Chef Sophie Budd, the not-for-profit organisation Food Rescue, and Foundation Housing is having a very positive impact on a group of lodging residents at the Hampton Road Lodging House.

The partnership sees Sophie work with residents to prepare ‘rescued’ food in the refurbished commercial kitchen on the lodging house premises and then share the meals with other people living in the lodging house.

The residents use perishable food collected from businesses such as restaurants and wholesalers  which is delivered to the commercial kitchen by Food Rescue.  Sophie then guides the lodging residents in a weekly cooking workshop that can see as many 200 meals produced for other residents at Hampton Road which houses up to 192 people. Soup, curries and banana bread are usually on the menu, depending on what food is donated.

Sophie says the atmosphere during the Monday morning workshops is ‘awesome’.

“The kitchen is a great place to come together and for everyone to be equal….The community around a kitchen can be really magical. It doesn’t matter who you are – in a kitchen there’s a job to get done.  And the great thing about this is that we’re feeding the residents as well.

“People living at Hampton Road do so for a range reasons; they may have lost connection with family, lost their job or have mental health issues – all sorts of problems.  Or maybe this is just the place that is the next step in their life,” Sophie said.

Sophie initially became associated with the Hampton Road kitchen through a place making project with arts organisation FORM. Under FORM’s guidance  transformation of the previously unusable kitchen was achieved.  They  worked to obtain grants and donations that enabled the commercial kitchen to be fully refurbished and equipped with cooking equipment. Sophie’s sessions with the residents have evolved from running informal cooking classes outdoors on a patio just using a bbq, to the current format over about 18 months.

While the weekly cooking workshops continue, Foundation Housing and Sophie are now hoping other organisations and businesses in need of a kitchen on a semi regular basis will consider hiring the Fremantle space and possibly using some of the now experienced residents to help them.  Sophie is keen to hear from people like market stallholders, people who want to make jams or preserves, or people who want to prepare food for a good cause.

“Our goal now is to make this kitchen sustainable and have the guys who live here cook with me, or businesses who hire the kitchen, every single day.”

If you are interested in finding out more about using the kitchen at Hampton Road email cook@tastebudds.com 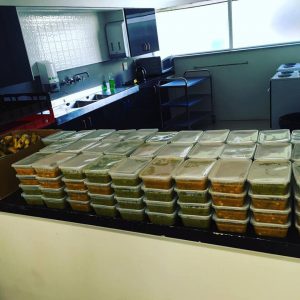